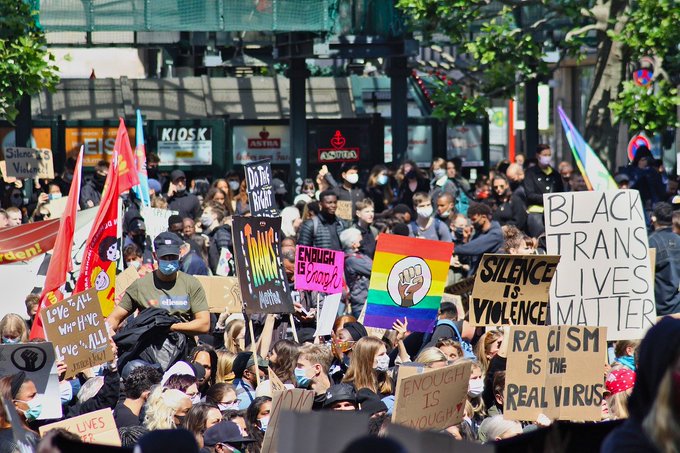 I have been reflecting on recent events in the US, the UK & around the world. Speaking to friends and colleagues, discussing the importance for the City Corporation and as elected representative in the City of London to listen and to act. Because as Michelle Obama says: “It’s up to all of us – black, white, everyone – no matter how well-meaning we think we might be, to do the honest, uncomfortable work of rooting [racism] out. It starts with self-examination and listening to those whose lives are different from our own. It ends with justice, compassion and empathy, that manifests in our lives and on our streets.”

Seeing the statue of Edward Colston toppled in Bristol we cannot escape the fact that the history and wealth of the UK, and indeed the City of London, is intertwined with the abhorrent practice of the slave trade.

We should look at our history and reflect, but most of all it’s about our actions now in the 20st Century. And I’m determined that the City Corporation takes a clear stance.

I therefore welcome the Black Lives Matters statement from the Lord Mayor and the Policy Chair, and their recognition that “it is not enough to say we are against racism but we have to work to eradicate all forms of racism in all that we do.”

I have long argued together with fellow Councillors that the City Corporation needs to better reflect the communities we serve. I strongly believe for example that we should proactively promote a more diverse group of candidates to put themselves forward for elections to ensure the Council better reflects our City

We set up a working group to work with external experts on recommendations to address this democratic deficit. I was part of this group, which proposed concrete actions adopted by the Corporation’s main decision-making body, the Policy and Resources Committee. We agreed to:

Following the recommendations we have seen progress, but there is still lots to be done – for example to ensure City events reflect the diversity of our City and London as a whole.

My fellow Councillor Andrien Meyers earlier this week urged the City of London to “do more than call for change, we must be the change.” I fully agree. We need to speak up against racism, show support, reflect and take action.

Cllr Meyers wrote to Lord Mayor William Russell, Policy Chair Catherine McGuinness, and fellow elected Members saying the fight for racial equality “starts with us”. In his letter, he said: “The events over the past few days and weeks have left me feeling a plethora of emotions – anger, confusion and frustration to name a few.”

“These events have brought back some unpleasant memories, such as the numerous occasions I have been ‘randomly’ pulled over by the police and had my person, passengers and car searched; having to defend my wife, son and myself at international airports; and more recently as a young/new councillor being stopped at the entrance to Mansion House and the Houses of Parliament; the list goes on.”

“All of these instances represent implicit assumption – if not outright discrimination – which many of you will never encounter. I don’t like the phrase but that is what many are referring to when they talk about “privilege”. It is about relative experience.”

Cllr Meyers went on to state that he is thankful that the Corporation is taking a public stand with its pledge to create a fair and inclusive society in response to the killing of George Floyd.

I am with Andrien who rightly says that we cannot let this message be regarded as tokenism in the absence further action. I was therefore pleased to be able to support the establishment of a new working group to consider what we are doing to tackle racism in all its forms. This group should be set up this month and consider concrete actions to be implemented at speed.

The Tackling Racism Working Party, which had its terms of reference agreed at the Policy and Resources Committee earlier this week, will assess whether the City Corporation could take any further action to promote economic, educational and social inclusion. It will also consider how to respond to historical issues, such as statues and monuments.

We are at a defining moment in our history, and as fellow Council member Baroness Scotland, Secretary General of the Commonwealth, emphasises: “the choices we make matter, perhaps more than at any other time for a generation. We cannot afford to allow racism to divide us and drive us into social unrest. (…) And it is only if we join together, in the face of our competing viewpoints and ambitions, that we can hope to defeat this pandemic, regenerate our communities and take on the economic and environmental challenges that this planet faces and defeat the corrosive stain of racism which would seek to tear us apart.”

As part of the City of London’s response I welcome that we are looking how to deal with historical issues, such as statues and monuments. The new Chair of the City’s Cultural Committee Deputy Wendy Hyde addressed this head on at our discussion in the Policy and Resources Committee earlier this week.

On statues I think Professor Mary Beard who wrote thoughful and nuanced article: “(…) Colston was on the Goebbels side of the divide and I was quite pleased to see him go, in a rather moving piece of performance art (…)”

Arguing that much “comes down to our understanding of the function of public statuary, and I hope that, when Sadiq Khan’s new commission to look at the diversity of London’s statuary (and more) gets under way, they will consider not just who is worthy to be commemorated, but what public sculpture is for. Sure, at the moment of its commissioning it is about the celebration of the individual concerned. But over the decades and the centuries that changes.”

We too have our “Edward Colstons” linked to the City. This Twitter thread from the Museum of London – where I am a Governor – responding to removal of a statue of Robert Milligan in the Docklands is a good example:

We can be the change

“So what can be done?” asks former Minister for Universities Sam Gyimah in the Financial Times. First, he reiterates: “words matter, silence matters and people have to take a stand. While it can be fraught to talk about race, it is not enough to not be racist. We have to be actively “anti-racist” and that requires action not just intention.”