Tradition and progress: Pride in the City of London

We have been able to celebrate two historic occasions in the City of London recently. Alderman Timothy Hailes was elected as the first ever openly gay man to hold the ancient office of Sheriff in the City and the Pride Flag was raised above the Guildhall for the first time in history. Two symbolic moments showing the Corporation is catching up with society and businesses.

I say catching up, because LGBT networks and promotion of diversity are already common practice within most City businesses, and attitudes in society have changed. Symbols matter. I’ve written about the importance of ‘opening up’ the City in an earlier blog post congratulating Lloyds Banking Group and Eversheds Sutherland – both based in the Ward of Cheap – who are recognised by Stonewall as one of the best employers for LGBT people in the UK.

City Sheriff
Every year Liverymen “assembled in Common Hall” elect two Sheriffs at Guildhall in the City of London. Normally, one of the Sheriffs is an Alderman, who will hope to go on to become the Lord Mayor of London.

In his election address Timothy Hailes spoke of the need to connect those in the Square Mile with those outside of it, and urged colleagues to help restore trust in London’s business district. Addressing the audience in the Great Hall, Sheriff-Elect said:

“I have gained some perspective about how the two different worlds – those inside and outside of the Square Mile – interconnect and overlap and perhaps, an understanding of how, and why, we can work for the betterment of them all. As well as reinforcing old friendships, we need to foster new relationships for the new digital age and establish new connections. We must also demonstrate that integrity and trust are the bedrock of our civic government and community.”

As Stonewall rightly points out: “Having high-profile people across all areas of society, from politics to sport, is crucial to creating inclusive environments and helping ensure the fair treatment of lesbian, gay, bi and trans people at work, at home and in their communities.”

Flying the Pride Flag
Only a couple of days after Timothy’s election we celebrated another historic moment when I had the honour to join Aldermen, fellow Common Councillors, City of London LGBT network and other City workers in the Guildhall Yard when the Pride Flag was raised onto the Guildhall to celebrate London Pride. 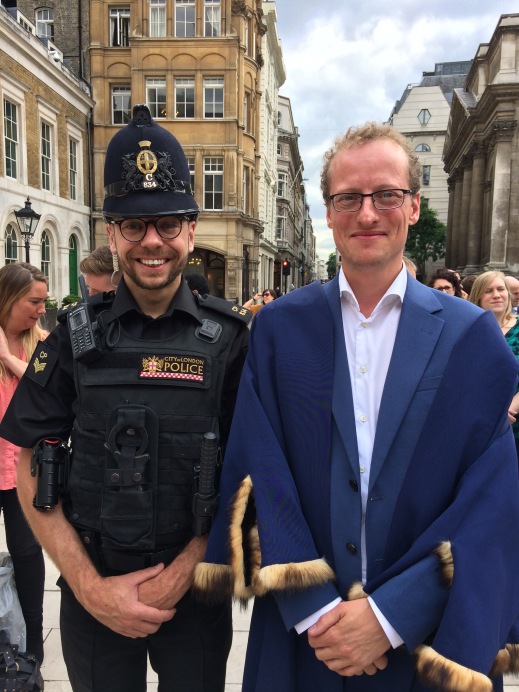 I also signed a motion tabled by Deputy Edward Lord OBE JP for the Court of Common Council to welcome this initiative and establish the raising of the Pride Flag in the City as an annual event. Together we can change things for the better. Tradition and progress is what makes the City of London such a fantastic place.